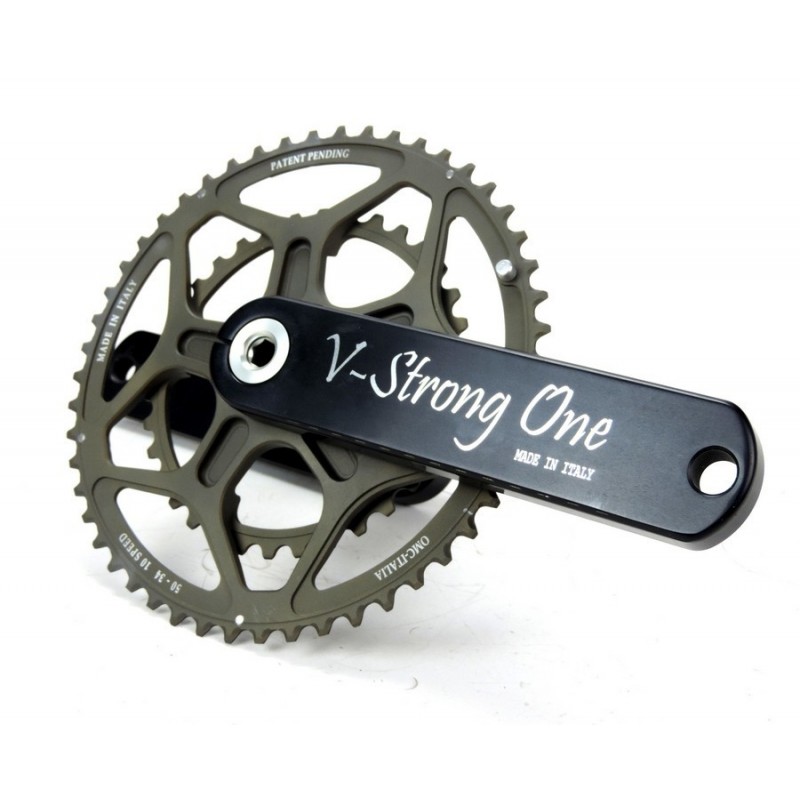 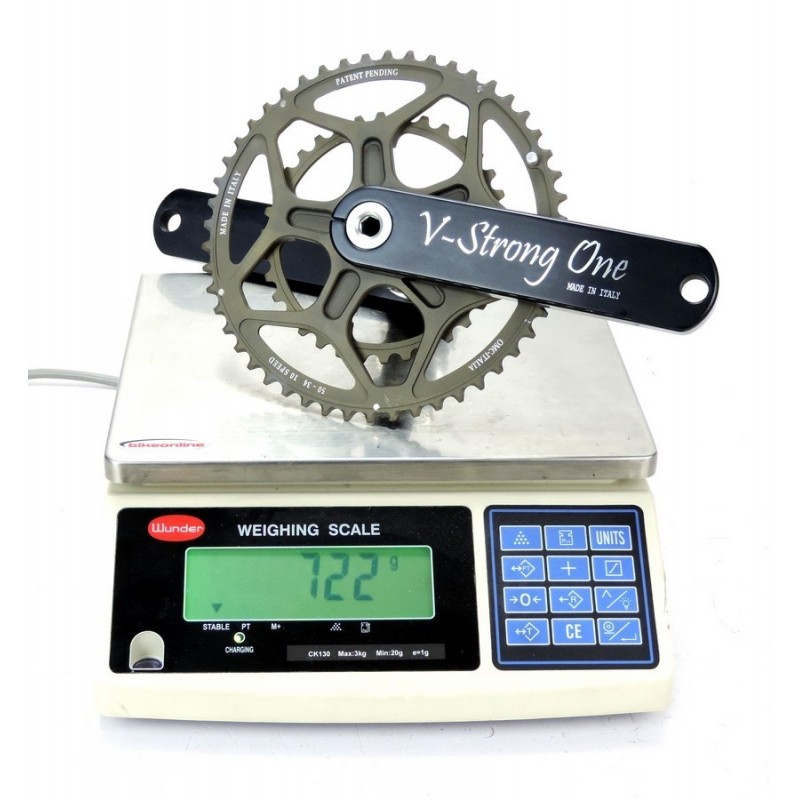 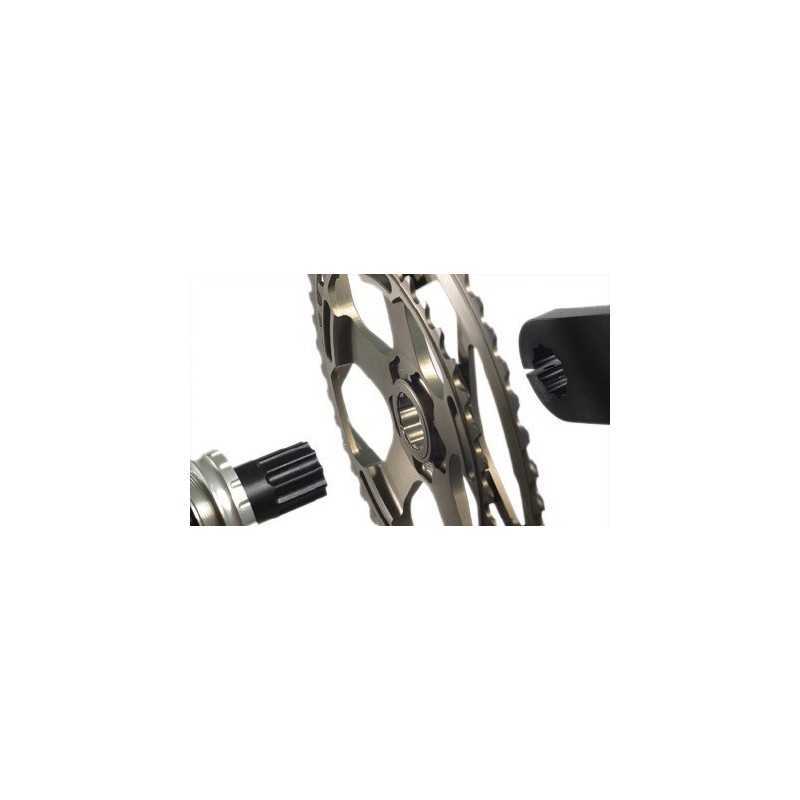 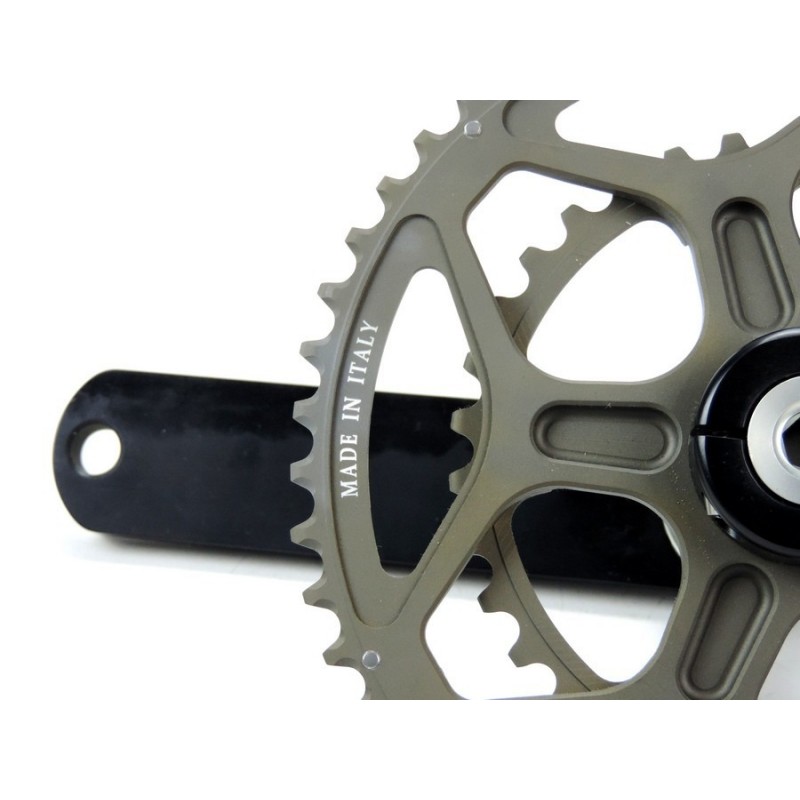 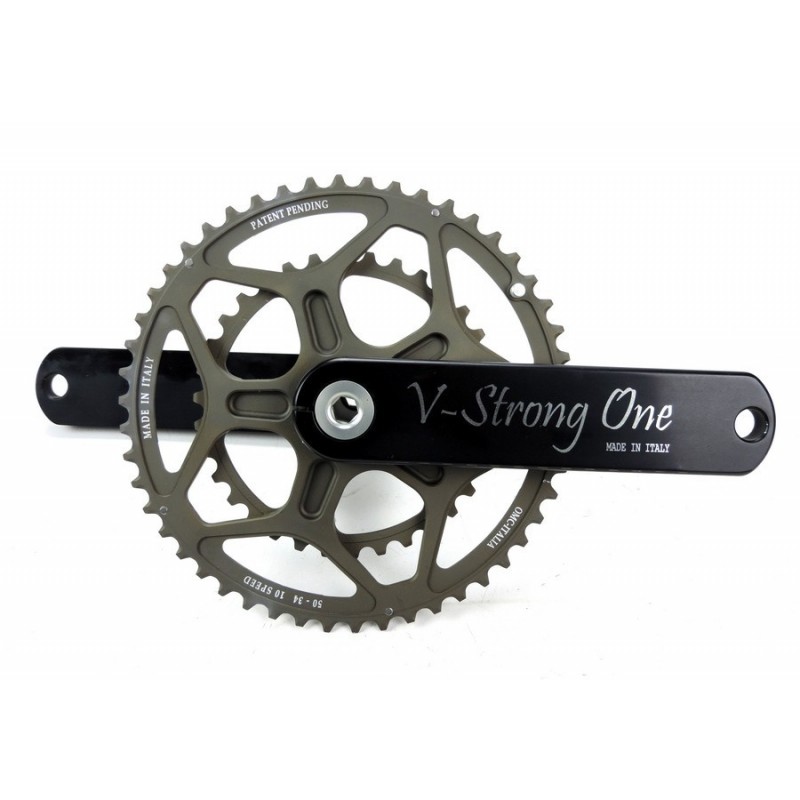 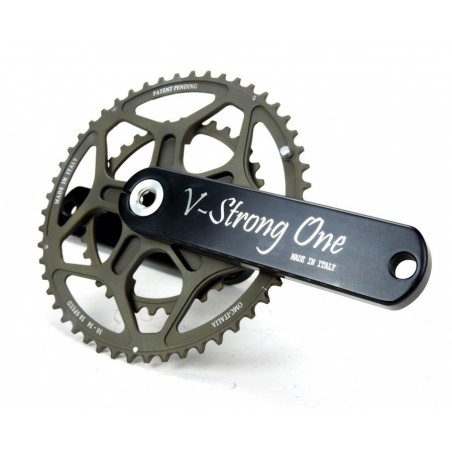 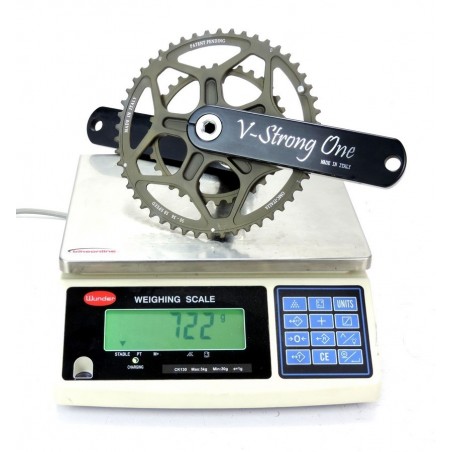 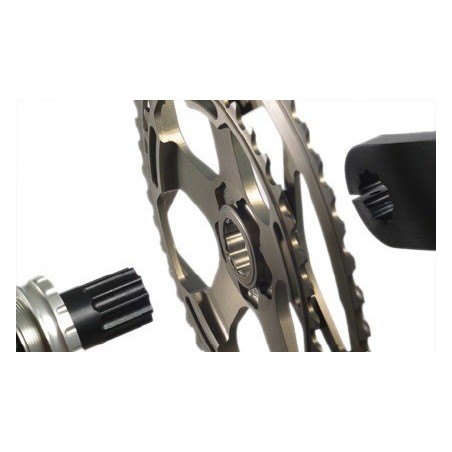 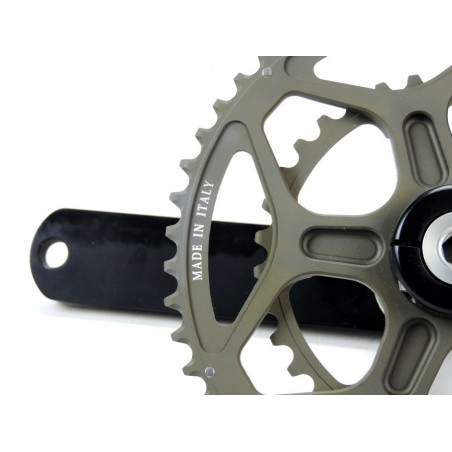 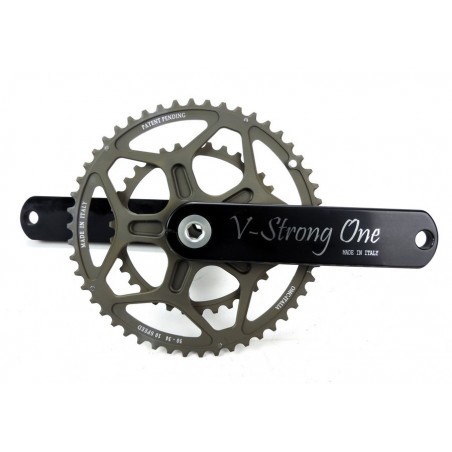 1. Low weight , the heavier configuration is around 722 grams.

2. Integrated with the left crank pin, with this system it was possible to significantly reduce the twist of the lever on the pivot points since there are no closure or terminals also in communist systems, the force applied on the left crank arm is not directly on the plateau, in fact, the applied force, before it collides with the clamp, then from the pin ends on the spider and the crawler to the crowns, all of these steps cause a dispersal of forces, with V-ONE STRONG force is transmitted directly from the pedal crank left the crowns, there being terminals and closing bussolino serracorone. The dispersion caused by the right crank provided with clamp, is significantly lower since it is located near the plateau, and then you do not twist the pin.

3. Crank ultralight, rigid yet resilient, are empty inside, think that the section of the crank in the most
often and 'less than 2 millimeters, the weight of 170 is only 166 grams against 185 grams of a crank into high-end aluminum competition, the wide section of the lever makes it extremely rigid and durable and aesthetically moves very well on bikes with oversize tubing frame.
The cranks like the rest of the crank are derived from solid, 100% CNC, without handouts, the
likelihood of finding air bubbles or cracks inside the material is practically impossible.

4. Plateau from billet integrated with crowns and we almost canceled the points of bending caused by the detachment of the material between spiders and crowns, there will not be the disadvantage of being left with bussolino sliced or seized under crowns and replace our system is more rigid because it is one block from billet.

5. Plateau independent crank right, directly in contact with the bearing right, with this system, we
significantly reduced the decline of the crown along the axis of the central movement, because the crank during exercise had no impact on spider as communist systems.

6. Ability to move from 53-39 to 50-34 plateau without encountering the problem of girobulloni and then without replacing the crank, you can mount plateau at both 10 and at 11-speed, so by replacing the bike or posterior group, you will not need to change all the cranks, just enough to buy a plateau.

7. written to crank OXIDE colors, are made with a written procedure for anodic oxidation, and will not be erased by rubbing with shoes, washing and light rubbing.

8) written on crowns laser, even in this case the writing can not be canceled, plus the treatment of
hardening open pore performed on the wreaths, as well as make them very resistant to wear, imprisonsthe lubricant for longer keeping the chain lubricated.

9. Speed of maintenance, cleaning and replacing the plateau, possessing all the keys, it takes less than 5 minutes to assemble the entire crankset including bottom bracket and only 2 minutes to replace the plateau. In case of cleaning, disassembly and assembly is fast.

No reviews
Tap to zoom